All nine lawsuits generally allege that the plans used unreasonable actuarial assumptions when converting the plans’ normal forms of retirement benefit such as a single life annuity, to an alternative form of benefit, such as a joint and survivor annuity. Essentially, plaintiffs allege that the alternative forms of benefit are not actuarially equivalent to the normal form of benefit as required under ERISA and, therefore, some retirees who are participants in the companies’ defined benefit pension plans have lost part of their vested retirement benefits in violation of ERISA section 203(a). The plaintiffs also claim that the plans’ fiduciaries breached their duties in using these alleged outdated mortality tables. Ultimately, the lawsuits seek reformation of the plans, payment of benefits pursuant to the reformed plan’s terms, and payment of improperly calculated and withheld benefits.

Defendants in seven of the cases have filed motions to dismiss, but decisions have been reached inonly two of these motions. The courts in Smith, et al. v. U.S. Bancorp (C.D. Minn.) and Torres, et al. v. American Airlines (N.D. Tex.) denied the defendants’ motions to dismiss. While the plaintiffs may view these denials as victories, this does not indicate that the plaintiffs will prevail at the end of the day as litigation continues and actuarial experts are brought in. Moreover, there are still five motions to dismiss pending — which will likely increase to seven motions if the defendants in the two latest cases file such motions. Because this litigation is still in the early stages, it is unclear how significant a threat these lawsuits may prove to be, but given the increase in the number of lawsuits filed and the spread of these cases among six circuits — the First, Second, Fourth, Fifth, Seventh, and Eighth Circuit — plan sponsors should take a close look at their plan document, specifically the interest rate and mortality table specified in the plan document.

As shown in the following chart, the plaintiffs in these lawsuits attack the use of various actuarial assumptions as unreasonable. 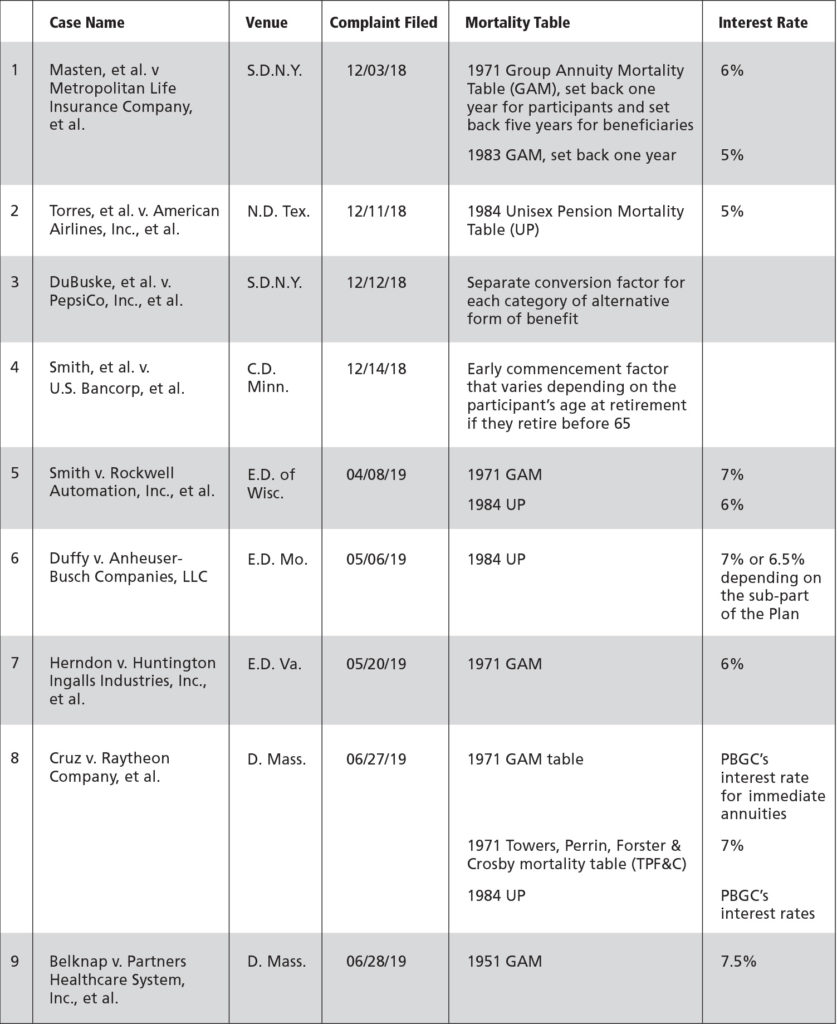 Summary of Defendants’ Motions to Dismiss

While all of the defendants advanced arguments specific to the facts and circumstances of their own case, below are the defendants’ general arguments.

Next Steps for Plan Sponsors

While awaiting a more definitive outcome in these cases, plan sponsors should review the interest rates and mortality table specified in their defined benefit plan documents. In addition to providing updates to plan sponsors, Trucker Huss is also available to assist with this analysis.